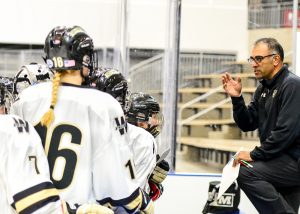 Kush Sidhu founded RinkSport in 1993 after leaving Northeastern University in Boston where he served as an Assistant Coach.  In his 4 years at NU, he helped the Huskies reach the Final Four each season – including a National title in 1989. Kush currently is the Executive Director of the Pride Hockey Association and Head Coach for The Washington Pride.

In 2007, Kush co-founded the Junior Women’s Hockey League (JWHL) which is the first known ‘Junior’ style hockey league for females. What started out with only 4 teams, has now grown to include some of the top teams in the US and Canada at the U19 ‘Major Junior’ level.  In 2011, the American Hockey Coaches Association recognized Coach Kush with the Joe Burke Award for his contributions and dedication to Women’s Ice Hockey.  In 2013, USA Hockey honored Kush and The Pride with the first USA Hockey Female Honors Award for leadership in the growth and development of ice hockey for females in the US.

Kush also works in various capacities with USA Hockey, serving as an Instructor for the Coaches Education Program in the Southeastern District,  He also recently served as a Head Coach at the USA Hockey Girls Select 15 and Select 18 Player Development Camps in St. Cloud, MN.

Stay Up With Us